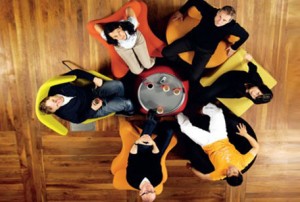 This is not so much of an issue as most studios are pretty flexible with clothes as long as they’re neat. I tried to get other designers I know to do a formal Friday rather than a casual Friday, and even I struggled with that. After that a super casual Friday dubbed, ‘flanny Friday’ was born.

One of the best tips I ever received was to dress for the job you want rather than the one you have. So if you want to be a senior creative, dress the part. It’s the first step in getting the job – looking the part. I have seen creative directors who look like the office mailboy and they struggle with getting respect. On the other hand I’ve seen mid-weight designers who look like senior creatives in the quality of their dress sense and are afforded a much greater level of respect by co-workers and clients because of their perceived level of designer from their attire.

And before you freak out that I am suggesting you wear a tie and dress shoes, I am simply suggesting that a smart-looking person is going to be better off than a scruffy one. For example, designer jeans and a good shirt will win over scruffy worn jeans and an old t-shirt any day.

After seeing a designer who looked like an accountant recently, I was thinking that if I perceive him as an accountant, what do his clients think of him? Now, I have worked with many big financial brands and found that in meetings you don’t want to be remembered as that scruffy designer. You want to be remembered for the creative work you did. First impressions last, and if your new client gets the impression you are disorganised or take no pride in your appearance, then it is going to take you time to shake that… if you even get the chance, as a lot of clients will just move on to find what they feel is a better designer.

So what does everyone wear to the office normally? Is it the same thing you wear for client meeting days? Do you have a very casual friday like ‘flanny Friday’? Or are you one of those tight black jeans, black turtle neck top and retro style glasses, that seems to be the perceived image of a designer these days?

Posted by Nicholas Turner on Saturday, December 9th, 2017 at 2:41 am in Article, As seen in desktop magazine, Blog