Red Dwarf is back

Red Dwarf is back 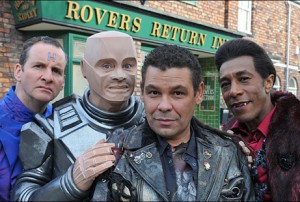 Many years ago the Red Dwarf series hit the ABC on a Sunday afternoon, it proved popular and moved to a late weeknight timeslot. Normally you would think that a sci-fi situation comedy set on a spaceship alone in deep space, crewed only by a robot, a deranged ships computer, a holographic crew member, a human male and a humanoid evolved from the ships cat, would be a very limited scope for writing. It was very funny and lasted several seasons, if you can forgive the cheap nasty sets and props of the earlier seasons, it still is a remarkable show.

Why am I telling you this? This year saw a new mini series released: the three episode season with a bonus making-of episode which goes behind the scenes.

The production standards are way higher and the advancement of the CGI is certainly a stark contrast to the old series.

Being able to purchase it through iTunes on my iPhone means I have a perfect time filler for my train commute to work.

Do check it out for yourself. True it is just more Red Dwarf, but it is new Red Dwarf!

The characters are still the same archetypes, and all have something that you can love/hate about them.

Kryten although a robot is like the dork of the group, Lister although somewhat cool is a dirty filthy slob, the Cat is pretty much the exact opposite as a self obsessed fashion and style addict and Rimmer the hologram is still a git, a coward and a pain but to the point where if he wasn’t there, you would miss the comedic antics his behaviour brings to the show.

Anyone else a big fan? If you are, you will understand when I say that my favourite episode is the Mr Flibble episode. If you don’t know what I am talking about, then you are in for a treat when you find the episode in the older seasons.

Posted by Nicholas Turner on Wednesday, September 8th, 2010 at 8:39 am in Article, As seen in desktop magazine, Blog